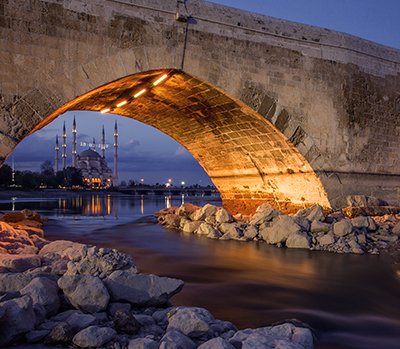 According to many sources, the name of Adana derives from name of the city 'Uru Adania' of the Kizzuvatna Kingdom under the Hittite Empire. According to an ancient Greek-Roman myth, the name Adana comes from the two sons of Uranus, Adanus and Sarus, who came near the Seyhan River (Sarus) and founded Adana. Archaeological findings in the region unearthed human settlements dating back to the Paleolithic Age. The Tepebag Mound, where archaeologists found a stone wall and a city center, was built in the Neolithic Age and is thought to be the oldest city in the Cukurova region.

In the Hittites, one of the oldest civilizations that lived in this region, it is understood from the tablets found in the excavations that the main nutrients are bread and water. In the Hittite tablets, around 180 types of bread, pies, donuts and bakery products are found. Cukurova, the center of cereals, vegetables and fruits, is the home of the first bakery products in the world and is the homeland of modern pastry. In the light of this information, it is possible to talk about the existence of a creative class that has created the gastronomic culture since the first years of the settlement and to say that the city has an important place in the development of culinary arts.

Adana, which has been under the influence of many nomadic and settled civilizations since the Hittites, has received important migrations from different cultures such as Balkans, Crete, Central Asia and Syria in the history of the Republic. Its deep-rooted history and multicultural structure have enabled the development of the rich cuisine of Adana today.