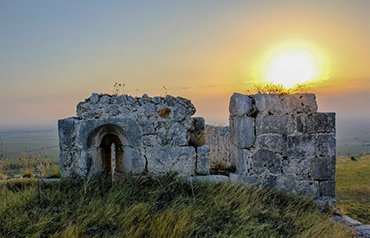 Ancient City of Anavarza is located in 28 kilometers south of Kozan, in Dilekkaya Village. After Roman Empire conquered the city in 17 B.C, it has become one of the most important metropoles of Anatolia. Some valuable assets of the city include a street with coloumns, public bath, church ruins, theatre, amphitheater, stadium, drains, rock graves, Necropolis (Ancient Graveyards) built in the west of the city, ancient roads, pool mosaics depicting Thetis the Goddes of Sea, Arch of Triumph with 3 entrances and Medieval Castle that towers over the lowlands with its beautiful, island-like sight. 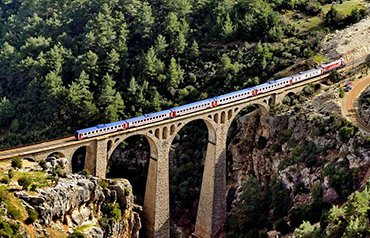 Varda Bridge is located in roughly 2 kilometers north of Hacıkırı Village, Karaisalı county and it is referred to by local people as “The Giant Bridge”. It was built in 1912 to complete İstanbul-Baghdad-Hejaz railway. The bridge was built using steel trussing and stone masonry techniques. It is 99 meters high and 200 meters long. Some scenes from the movie ‘James Bond Sky Fall’ were shot on Varda Bridge in 2012. The bridge is 60 kilometers away from the city centre and is accessible by highway or railway. 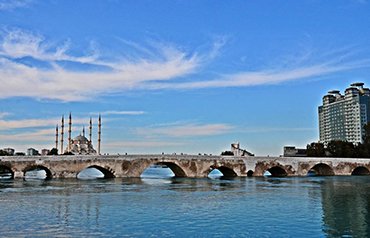 Taş Köprü goes across Seyhan River to connect Seyhan and Yüreğir counties. It was built in the age of Roman Empire in Adana and it is a prominent symbol of the city. Taş Köprü was built by Roman Empire 1700 years ago, and it is the oldest bridge in the world that is still actively used. It was pedestrianisated after the restoration in 2006. It is 319 meters long and 11,4 meters across. Of 21 round arches of the bridge, 14 is still visible today. 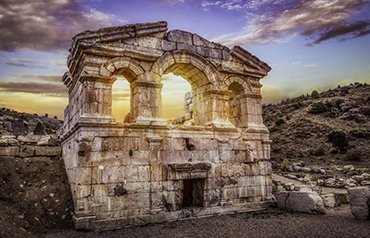 Ancient City of Şar Komana is located in Şar Village, 20 kilometers away from Tufanbeyli county. It was used as a residential area in Roman, Byzantine and Ottoman periods. It was an important religious centre in Kizzuwatna and Hittite Era. Roman historical artifacts in the region survived until today. Some important ruins of the region are The Theatre, Heroon (The Broken Church), Korinth Temple (Alakapı). 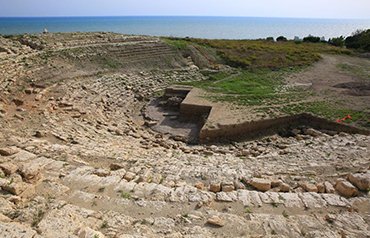 Ancient City of Magarsus is located in Dört Direkli county, in 4 kilometers west of Karataş which is 49 kilometers away from Adana city centre. It was built in 7th century B.C. It was an important residential area in Greek, Roman and Byzantine periods. Magarsus is surrounded by ramparts and its structure is based on grid plan. Some of the Ancient Era remains that survived are the city rampart, Medieval Castle, Athena Magarsia Temple, the theatre, stadion, cistern, Byzantine and Ottoman public baths. Recently unearthed, Ancient Theatre is definitely a must-see of the area. 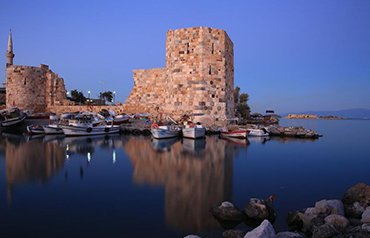 Yılankale is an important castle located in 40 kilometers east of Adana, on Ceyhan River bank. It is one of the Crusader Castles built in 11th century. Ramazanoğlu Principality deserted the region in 1357. In 1671, Turkish phiolosopher and traveller Evliya Çelebi reintroduced the castle as “Şahmeran (Basilisk) Castle”. 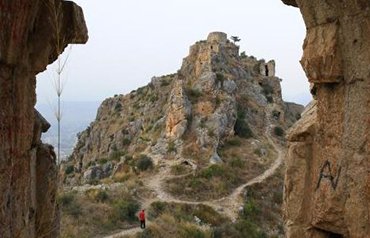 Kozan Castle is located in the centre of Kozan county. It was built on a steep hill made of limestone, on a location that allows the castle to dominate the area. Kozan Castle is one of the oldest castles of the region. It was built in two groups and it has 44 towers and bastions. It is an important religious centre for Christians due to inunction and baptising ceremonies performed inside.. 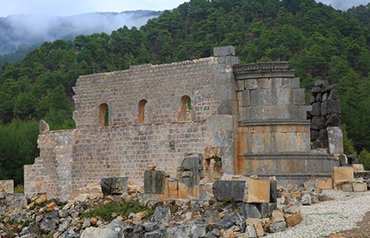 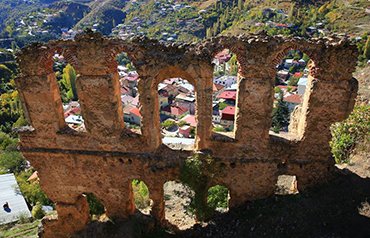 Haçin Castle in Saimbeyli county served as a police station for the protection of the caravan route in Medieval Era. The castle was initially called Batimon. Only two bastions of the castle remain today. 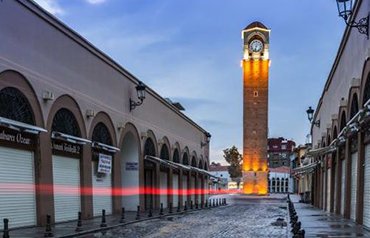 Construction of Adana Clock Tower started in 1881 on the order of Ziya Pasha and it was completed by the city governor Abidin Pasha in 1882. It is the highest clock tower in Turkey with a height of 32 meters. It was built using bricks and cut stone. 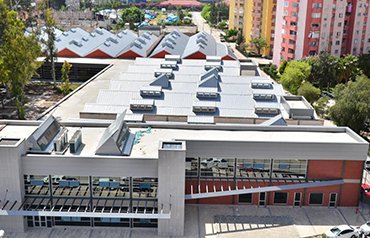 New Adana Museum Complex is Turkey’s largest museum complex. The first step of the project, building of the Archeology Museum has been completed on 18 May 2017 and hosted its first visitors soon after. In Mosaic Museum, arrangement and display of the pieces has been completed and it is expected to be open to visitors soon. The second step of the project includes Agricultural Museum, Industrial Museum, conference halls, drive-in theathres and cafes and it is soon to be realised. 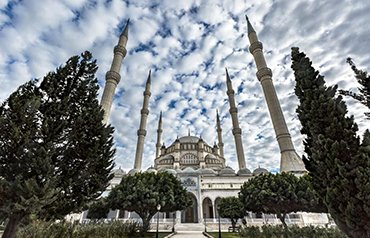 Sabancı Central Mosque is located in the west of Seyhan River. It was built in 1988-1998. Sabancı Central Mosque is the largest mosque of Turkey with its 6 minarets. 4 of the minarets have three balconies and 2 minarets have two balconies. The mosque was built in classical Ottoman Artitecture style and it has a unique dome system. Ceramic tiles, stained glasses and scriptures decorated with gold leaves are absolutelty worth seeing. 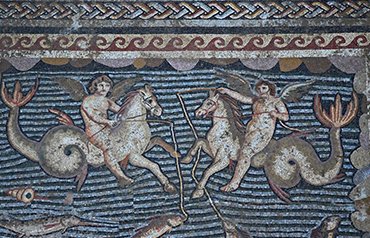 Hippocampus Mosaics were unearthed during the rescue excavations carried out by the museum. On the mosaics, Erotes are depicted fishing over hippocampi with fishing rods and webs. 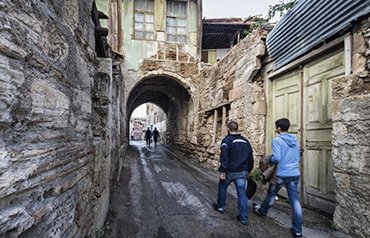 Tepebağ neighbourhood was built on the only elevated segment of the region in order to avoid Seyhan River’s floodings. It has a long history that dates back to 4000 years. Nurse Sistsnefru sculpture which is currently exhibited in The Metropolitan Musem of Art, New York was made during the Middle Kingdom Era of Egypt, in the age of 12th Dynasty and it was unearthed in Tepebağ. There are many ingenous homes and streets in the neighbourhood. 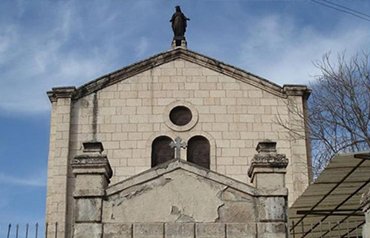 St. Paul Church (also known as “church with the doll”)

St. Paul Church is located in Çakmak Street in Tepebağ. It is an Italian Catholic church built on a basilical plan in 1881 in the name of St. Paul.There is a 2,5 meters tall Mother Mary statue on the roof above the entrance of St. Paul Church. Local people commonly refer to the statue as a “doll” therefore the church is often referred to as “church with the doll”. 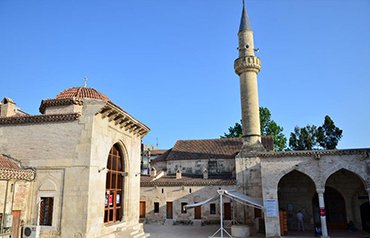 Oil Mosque was built as a Crusader Church in the name of Saint Jacque but it was later made into a mosque in 1501. The mosque is a part of the kulliye (an islamic-ottoman social complex) along with the old church next to the mosque and madrassah. It was initally called The Old Mosque. Over time, people started calling it Oil Mosque because of the oil bazaar set up in front of it. 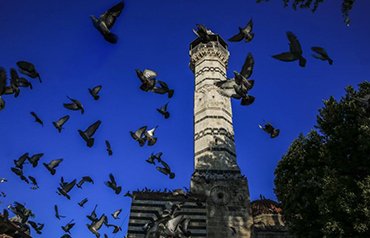 Grand Mosque was built by Ramazanoğlu Halil Bey in 1513. In 1541, the mosque was expanded and restored by Piri Mehmet Pasha. Seljuk, Mameluk and Ottoman architectural characteristics can be observed in the mosque. Grand Mosque has 4 parts: Shrine, main prayer place, yard and the old rectangular building in the west. A shrine with a dome on top of it was built in the east of the mosque in 1508. The madrassah was built accordingly with the classical Ottoman Madrassah plan on the order of Ramazanoğlu Piri Paşa in 1540. 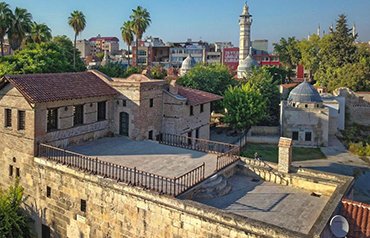 Ramazanoğlu Mansion is the oldest house in Adana. It is located in the kulliye of Grand Mosque. It was built on the order of Ramazanoğlu Halil Bey in 1495 according to the scriptures on the mansion door. Reference materials indicate that it was a tall and large building. It was built in a large garden for both winter and summer. It is a known fact that Yavuz Sultan Selim (Selim the Grim) spent 3 nights in the mansion on the way to Egypt and IV. Murat spent 3 nights there on the way to Baghdad. 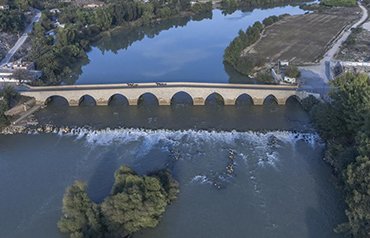 Misis Hill Town is located in Yakapınar region, Yüreğir county in 27 kilometers east of Adana city centre. Archeological excavations confirm that the site has a history dating back to 7.000 B.C. It was an important centre in Roman and Byzantine periods. Some important relics found in the site are: a mosaic base slab of a basilic from 4th century, ramparts on acropoles, aqueducts, public baths, rock graves, stadion in the north, theatre ruins in the south and Havraniye Caravansary built in Seljuk Turks period. Misis Bridge was built on the order of Roman Emperor Flavius Julius Constantius in 4th century and restored by Byzantine Emperor Justinian I in 6th century. The bridge has 9 archs and it brings together the east and west coasts of the city. 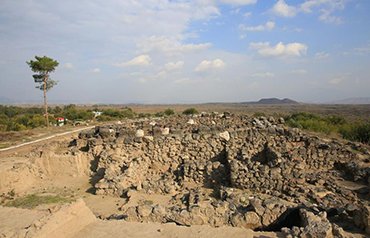 Tatarlı Hill Town is located in Tatarlı Village, Ceyhan county which is 85 kilometers away from Adana city centre. It was an independent province under the ruling of Hittite Empire. Tatarlı Hill Town was one of the most important sites of Kizzuwatna Kingdom that joined the Hittite Empire in later periods of the empire. 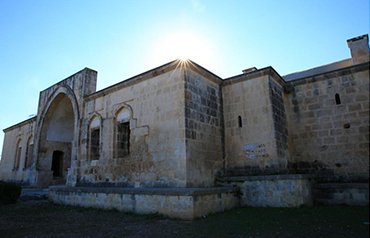 Kurtkulağı Caravansary is located in Kurtkulağı, on Adana-Aleppo caravan route. It was built on the order of Hüseyin Pasha in 1659 and strategically used by Ottoman Empire. 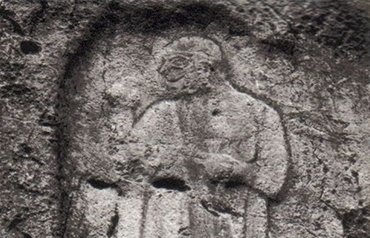 Sirkeli Hill Town is located on the Ceyhan River bank in 40 kilometers east of Adana. One of the most important trade routes from Syria to Central Anatolia goes through this site. The hill town was used as a residential site from Middle Bronze Age to the age of Roman Empire (100 A.D). There is a rock relief on a rock surface that faces the river bank. The relief was made in Hittite period. (1306-1282 B.C) and it belongs to the Hittite King II. Muwatalli. 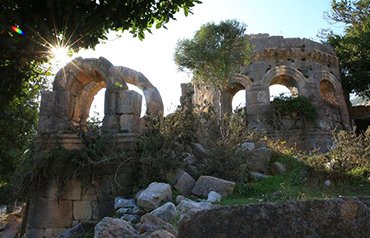 Aladağ Akören is located in the Akören county in Aladağ. There are two sites referred to as Akören 1 and Akören 2. A number of church ruins found in the site indicate that it was a religious center. Abcissa and some outer walls of the church remain intact. 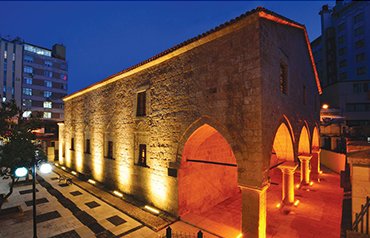 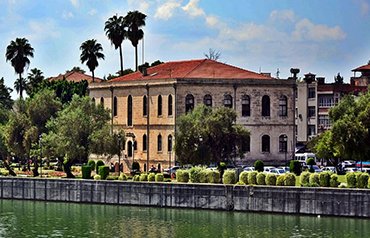 It is located on the Seyhan River bank, in the south of Taş Köprü. It was built in 1881-1883, in SultanAbdul Hamid II period, on the order of Adana governor Abidin Pasha to be used as a military junior high school. It served as an All-Girls High School from 1932 to 1998. The building was restored in 2005-2006 and it was repurposed as a Culture and Art Center. 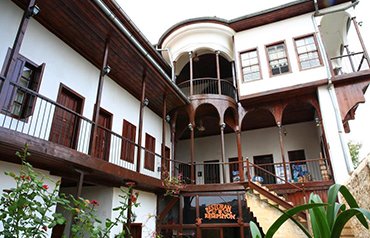 Arıkan Mansion is located on the foothills of Kozan Castle. It is one of the oldest civil architectural works of the region. Arıkan Mansion is estimated to be built in late 19th century. It stilll serves today as a boutique hotel and a restaurant and it allows its visitors to enjoy a historical-mystical experience. 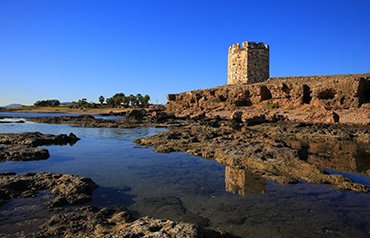 It was built in the age of the Ottoman padishah Süleyman the Magnificent and named after him. Structure of the tower was designed to go up gradually so that padishah would know about a potential naval attack beforehand.