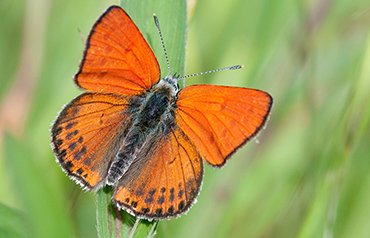 192 of the 388 species of butterflies in Turkey are flying in Adana. Three of them are endemic to the region and one is endemic to Saimbeyli. Especially Saimbeyli district comes to the forefront in butterfly biodiversity. This situation is closely related to the fact that the district is located in the central part of the Taurus Mountains, above the Anatolian Cross and in three climatic zones. According to scientific studies conducted in the field by Hesselbarth and his friends prior to the 1995, 121 butterfly species (approximately one-third of Turkey's butterfly biodiversity) are listed in Saimbeyli. Wagener reported that 11 of these species were endemic and 15 were rare. The butterfly biodiversity of the district has risen to 161 species with the new species identified in the observations conducted between March and October 2016 within the scope of Discover Your Own Butterfly Project. One of the dozens of blue butterflies flying in Saimbeyli is Polyommatus theresiae (Saimbeyli Blue). It is an endemic blue butterfly to Saimbeyli and that makes it special. Together with the newly observed species, 49 species (31%) of Saimbeyli butterflies belong to Lycaenidae family, 61 species (38%) belong to Nymphalidae family, 24 species (15%) belong to Hesperiidae family, 19 species (12%) belong to Pieridae family and 8 species (5%) belong to Papilionidae family. Maintaining the diversity of butterflies in Saimbeyli is one of the strategic issues for Adana in the field of nature. The Project “Discover Your Own Butterfly”, is supported by a program, which is carried out in partnership with T.C. Ministry of Culture and Tourism, United Nations Development Program (UNDP) and Anadolu Efes in 2017, is among the most important of these activities. 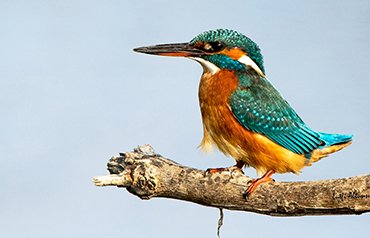 Adana is located on one of the significant migration route for soaring migrant birds. It holds a very rich geographical diversity from alpine zone of the Taurus Mountains to coastal line. Yumurtalık and Akyatan lagoons are the 2 of 14 Ramsar Sites in Turkey. Additionally thanks to wetlands and Natural Sites like Tuzla and Ağyatan, Adana offers to be one of the most important hot spots for birding in Western Palearctic. Adana, together with Göksu Delta (another RAMSAR Area in Mersin), Osmaniye Kırmıtlı Bird Preservation Area and Belen Pass of Hatay Province, constitute a remarkable bird route. In addition to alpine birds such as Caspian snowcock (Tetraogallus caspius), red fronted serin (Serinus pusillus), Eurasian crimson-winged finch (Rhodopechys sanguineus), you may observe typical soaring diurnal migrant raptor species like Egyptian vulture (Neophron percnopterus) and long-legged buzzard (Buteorufinus) in Adana. Species like common kingfisher (Alcedo atthis), white-throated kingfisher (Halcyon smyrnensis) and pied kingfisher (Ceryle rudis) live and breed in the province which is a very important home for wintering area of the water fowls like common cranes (Grus grus). It is also the closest observation and photography spot for the European birders for rare birds like black francolin (Francolinus francolinus), graceful prinia (Prinia gracilis), white-spectacled bulbul (Pycnonotus xanthopygos). According to e-bird Turkey, 342 bird species have been recorded in Adana, which is approximately % 70 of the 486 bird species recorded in Turkey. Protection and development of the wetland areas in the province combined with awareness towards preserving wildlife of Adana will help not only to birders but also to our earth’s natural resources. 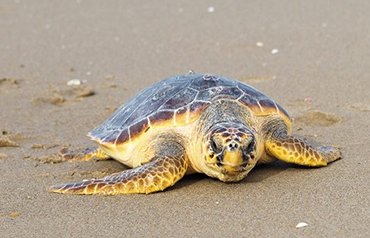 Sea turtles are estimated to exist on the world since the last 100 million years. Caretta Carettas have an approximate lifetime of 100-120 years and since they are extincting, they are put under protection. Caretta Carettas spend their life in marine environments; however, they go ashore to lay their eggs.These turtles which can breath in the air can live under the water for a long period of time. The Caretta Carettas living in Turkey are 70-75 cm long and 50-55 cm wide. They can have two claws maximum. Their heads are triangular in shape. Although they do not have teeth, they can bite. They feed themselves by molluscs, jelly fish, blue crabs, and oysters. They have strong jaw muscles. Caretta Carettas lay eggs for reproduction. They bury their eggs carefully in the ditches they open by themselves. They can leave 100 to 200 eggs at one time. In general they prefer the same shoreline they know. They leave their eggs between May and August in the northern hemisphere. This period is October- March in the southern hemisphere. Their incubation period lasts 45 to 60 days. When the babies are ready to break the shell they use their temporary pointy teeth named caruncle. They prefer to leave the shell at night. After three-four days on average, they leave their eggs as groups and find their ways towards the sea in the early hours of the night after the sunrise. Caretta Carettas live in the warm waters of the Atlantic, Pacific and Indian Oceans. InMediterranean, their homes are in Greece, Cyprus and Turkey. They leave their eggs in the shores of Yumurtalık (Adana), Karataş, Akyalan fishpond, Belek, Köyceğiz, Fethiye, Anamur, Gazipaşa, Ekincik and Dalaman. İztuzu beach in Dalyan is the largest area where they leave their eggs. 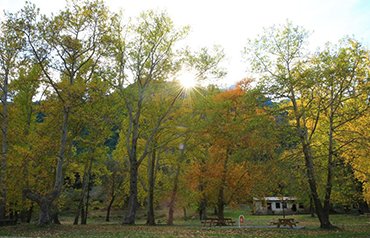 Belemedik is connected to Pozantı with a 10 kilometers long, stabilized highway. There are stone and wooden houses built on the highlands of Çakıt Stream bank. Belemedik train station and the surrounding buildings were constructed simultaneously with Berlin-Baghdad railway. Thousands of Turk and German citizens resided in Belemedik for nearly 20 years during the construction of the railway. German citizens built a large worksite in the region along with a church, school, cinema, hospital, public bath and a mosque. Belemedik is home to a rich wildlife including wild goats, boars and predatory birds. It is also home to beautiful landscapes, especially in autumn. Belemedik attracts many photographers and nature lovers to the region every year. It is easily accessable by car or train. 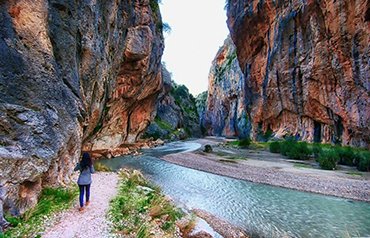 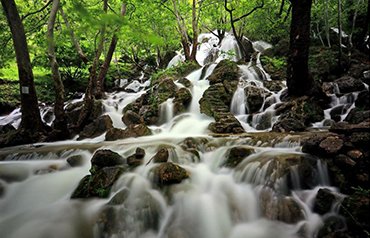 Obruk Waterfall is located in Saimbeyli. It is a tributary stream of Seyhan River that flows into Göksü River. Obruk Waterfall flowing through rocks under the shadows of pine and plane trees is a visual and spiritual experience for visitors. 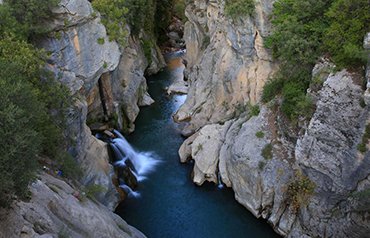 Dokuzoluk Picnic Area is located above Eğlence River with its arbours, picnic tables, BBQ platforms, prayer room, public toilets and fountains. The area is convenient for hiking, swimming, fishing and many more. 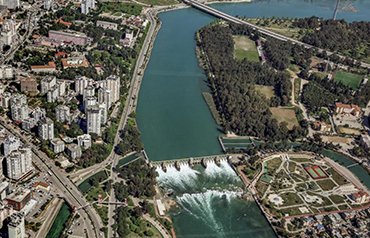 Old Dam & Reservoir is one of the top traditional locations of Adana. It is also perfect to go for a walk on Seyhan River bank and the regulator bridge. There are bici bici and şalgam sellers found in every corner of the site. 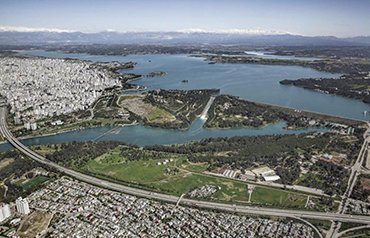 Seyhan Dam is an earthfill dam that is located in 10 kilometers north of Adana. It was built in 1954. Second stage of Turkey Offshore Championship has been held in the region since 2006. The region is convenient for hiking, amateur rod fishing, water sports, paragliding, and bicycle tours. 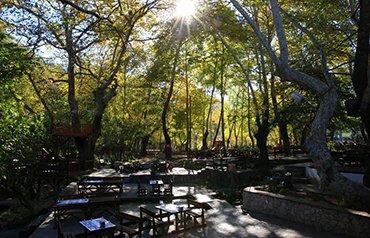 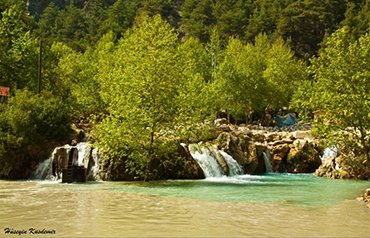 Yerköprü Picnic Area is located in Gülüşlü Village, 7 kilometers away from Karaisalı county. Yerköprü is famous for Çakıt River that creates a natural bridge by flowing underground at some point and rising back to the surface 250 meters later. It is also famous for its picnic areas and restaurants. 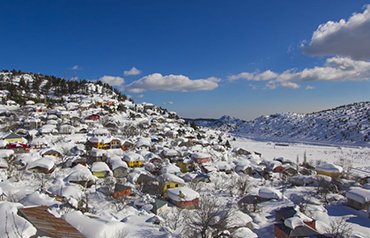 Kızıldağ Highland is 27 kilometers away from Karaisalı county and it is connected to the county with a blacktop road. The highland which was named after Kızıldağ is very famous among local people.

Şekerpınarı is a picnic area where one major tributary of Çakıt River flows through inside of a mountain. It is located 5 kilometers away from Pozantı. Şekerpınarı region is famous for its delicious steak, especially ribs. There are restaurants known all over Turkey in the area. Akköprü is estimated to be built in 833. It is often referred to as Şekerpınarı Bridge due to the Şekerpınarı stream flowing nearby.
Akköprü has one arch and it is made of stones. It is 83 meters high, 5,70 meters wide and its arch span is 10,35 meters. 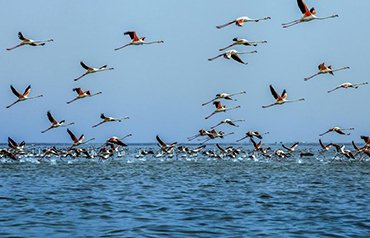 The area was declared to be a Wildlife Protection and Management Site by the General Dictatorate of Natural Reserve and National Parks in 1987. It was later made into a Wildlife Improvement Site with a cabinet decree in 2005. It is the largest lagoon in Adana. It is a natural habitat especially for waterfowl. The area is in the scope of RAMSAR Agreement which is an important international agreement regarding the protection of wetlands.
The area is the natural habitat of many bird species such as Francolin, Purple Gallinule, Marbled Teal, Snowy Plover, Spur-winged Plover, Little Tern, Flamingo, Shelduck, Wigeon, White-headed Duck and Coot. 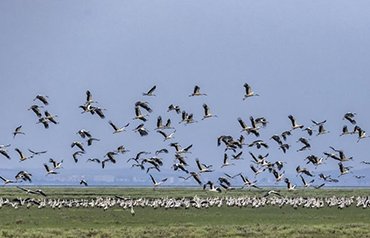 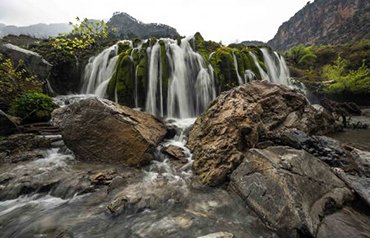 Küp waterfalls is one of the ten waterfalls located in a 1.5 km-long canyon. The canyon is 37 km away from Aladağ town. After recent arrangements, constructions of bridges and stairs the area has been opened for touristic visits. With hiking routes, swimming in small ponds under the waterfalls, caves with freshwater resources and natural bridges this area has been an attractive touristic center. 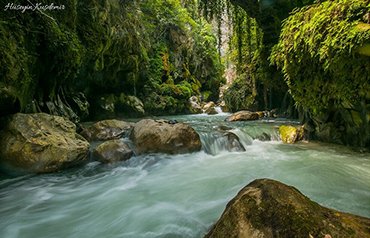 Körkün Creek, which is one of main tributaries of the Seyhan River, carves out many ponds and forms waterfalls while it passes from the Körkün Canyon. It has easy trekking routes which do not require rock climbing. The route includes streches by the creek and forest areas and it is 6-7 km-long. The route is ideal for those who want to realize a trekking in a cool weather and it only requires equipments at amateur level. Magnificent scenes are promised during the route. 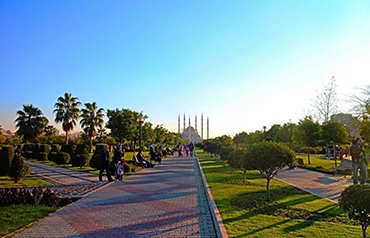 Adana Central Park is located in the vast green area on the river bank along with Sabancı Central Mosque. With many tree species found in the park, it is a prominent example of European central park culture. It is also the largest park in Turkey with a surface area of 33 hectares. There are 40 tree species, 67 plant species and over 400.000 plants in Adana Central Park. There are 12 pools, a playground, a skatepark, amphitheatre and recreational areas in the park. Also, there is a 3 kilometers long track available for joggers and cyclers.